The Terrible story of Little She

“I loved them! They played and sang so well!”

“Den förskräckliga historien om Lilla Hon/The terrible story of Little She is enjoyed by students as well as teachers.”

This is the story of Little She. It is an awful, terrible and horrific little tale. But it is also a bit crazy, exciting and fun. And it all ends quite happily. At least for some …

“When I wrote the music for ”Little She” I tried to create multi layered music. Lena’s story about Little She is not predictable – and the music should not be either. I have explored different music genres and tried to blend them in to the opera. It has been a fantastic and fun challenge!”
Magnus Båge, composer

Here you can listen to some of the scenes and songs in English and in German: 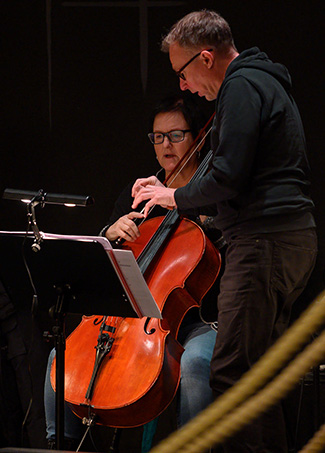 “Magnus Båge’s music holds both art music, dance and jazz, but has its base in art music with a little modern spice without being modernist. It makes it easy-listened and more mood-creating than strongly melodic, it expresses fear, joy, relaxation, caution – the whole spectrum of emotions that opera music should. ” “Last but not least, this little opera gem has a twist, where the question of who is evil and who is good gets a completely different answer than in ordinary horror stories.”

Lena Ollmark is a writer with a preference for ghost stories and horror, but she has also written scripts for television series such as “Nasse” and “Laban the Little Ghost”. She visits lots of schools to talk about fears and about writing stories. She has written books like “Mördaren i parken”, “Contained” (“Inmurade”) and “Lägret”.

“I love ghost stories and horror – and in my favourite stories you scream, laugh and sob – all at the same time. For me, “The Terrible story of Little She” is a story that shows that joy always wins over evilness and fear – and that you can find your best friends where you least expect it.”

Magnus Båge is a musician and composer. As a flutist, Magnus has made several inventions to improve the possibilities of the instrument. Composers such as Rolf Martinsson have chosen to write music that is adapted for Magnus’ “new” instruments. Nowadays, Magnus is increasingly focusing on writing and has taken the curiosity of the unexplored music into his work.

Little She’s biggest wish in life is to be allowed to enter the school’s pillow room. But the other pupils think she is too much of a coward. They tell her stories about the Teacher who hung herself up in the school attic – and about the evil chef who haunts the school’s kitchen – and about the cruel boy who ran with the scissors and now haunts the craft hall. And then they laugh at the terrified Little She. Because nobody believes in ghosts. Not really?

Little She is alone in the attic, she is afraid, frozen and hungry. And tired. She falls asleep and is awakened by the ghost teacher! Little She is dead scared but finds out that it was the students’ fault that the teacher died in the attic. The teacher is really hungry and together they go to the school kitchen. In the kitchen, they meet the horrifying chef. He hates students and tries to kill Little She – but instead his arms and legs fall of. Little She gets to know that it was the students’ fault that the chef died in the school kitchen.

Together, the three of them now heads to the handicraft hall – where the Teacher and Little She start to patch up the Chef. But they are interrupted by the ghost of the boy who ran with scissors. He says that it was the students’ fault that he died in the handicraft hall. The craft boy is crying and crying. But Little She knows what can help them all. They should all go to the pillow room!

The next day, the other students realise that Little She is missing. But they do not care for long – instead they decide to go to the pillow room. After entering the door slams behind them and they are trapped together with the ghosts and Little She. And no one can hear the students’ cry for help – no one will listen. Because nobody believes in ghosts. Not really?

In their first collaboration, the author Lena Ollmark and the illustrator Per Gustavsson offer absurd humor and horror, in text and in image. It’s a different kind of ghost story with excitement and laughter! In 2017 the book was nominated for an August award.

“The book publishing has its glittering shiny pearls. This one is absolutely fantastic. … In one way it is very macabre, but it is also very warm and loving.” Viktoria Hansén, “Malou efter tio” TV4

In October 2018, “Den hiskeliga berättelsen om Lilla Han/The horrific tale of Little He” was released by Lena Ollmark and Per Gustavsson. It is a story that somehow unfolds in the same world as “Den förskräckliga historien om Lilla Hon/The Terrible Story of Little She”. It is not a sequel – rather a sibling book. Little He is, in a way, Little She’s sad younger brother.

Are you interested in the opera Den förskräckliga historien om Lilla Hon/The Terrible Story of Little She? Contact the composer Magnus Båge magnus@magnusbage.com or writer Lena Ollmark lena@ollmark.se. You can also visit magnusbage.com or ollmark.se.